GOD’s people across this land! Send out the praisers – Praisers and prayer with fasting needed RIGHT NOW to confuse and rout the enemy – 2 Chronicles 20 (through the elections) 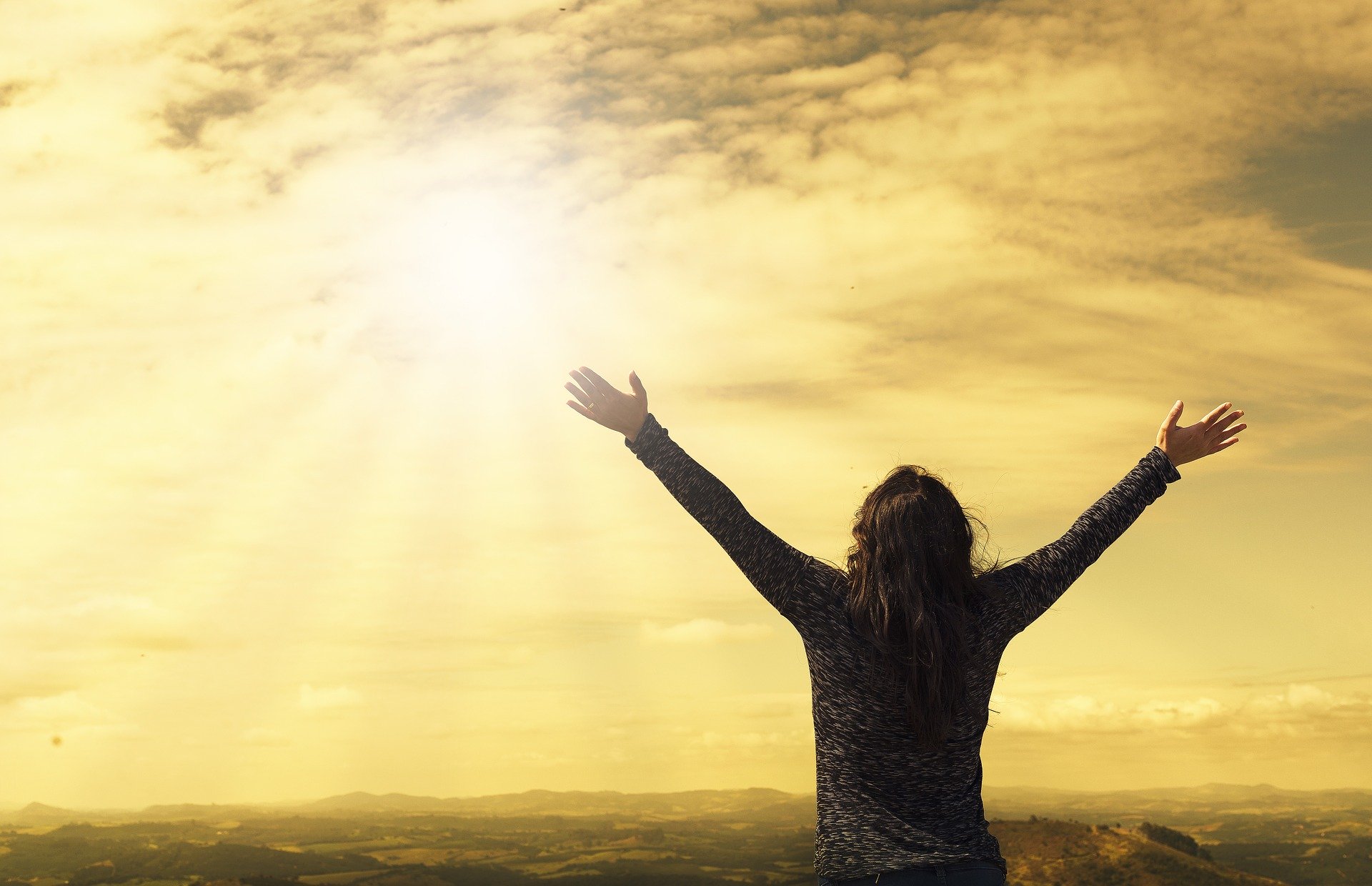 God set precedence in His Word that praise moves God to confuse the powers of darkness so greatly that they are utterly defeated!

Sometimes, prayer alone is not enough. Sometimes, the evil is so deeply rooted in a place or land that it requires the spiritual weapons of prayer with fasting and praise, praise, praise and worship. Deeply rooted evil like years and years of shedding of innocent blood through abortion.

Look around and you will see evidence of a spiritual war everywhere – from COVID-19, to riots, chaos, and mayhem, lies spewed from the media, wicked people in power in places like New York, California, mass deception, etc.

THIS. IS. A. SPIRITUAL. BATTLE.

Yes, we must do things in the natural and actively vote, etc. but it is also our responsibility to rule and reign with God through prayer and the spiritual weapons of warfare His Word tells we are equipped with BUT MUST USE in order for them to overcome to victory.

Check out this teaching by Derek Prince for a wonderful Bible based Word from the Lord on this.

For FAR too long has the church been passive, allowing the enemy to steal from us, to take land from us.

As God’s people, we have a GREAT RESPONSIBILITY in the earth to use the authority and spiritual weapons of warfare to confront and defeat the powers of darkness behind the evils of this world.

Again God says, “SEND OUT THE PRAISERS ACROSS THIS LAND!”

Brothers and sisters in Christ who take God for His Word, contact your churches, friends in Christ, and go to a safe place to gather and take turns (shifts) praising the Lord until change is seen. Also with prayer (see prayer to model prayers after below, 2 Chron 20:6-12) and fasting.

I also believe in my spirit this needs to happen all the way up to the elections in November with praisers and prayer AT the polls and fasting, and outside secretary of elections offices – ALL done legally and standing where allowed (e.g. a sidewalk across the street maybe?). Strategic locations that the Holy Spirit will show you.

Gathering in churches to praise is great too, but again, I really feel in my spirit that just like 2 Chron 20:21, “And when he had consulted with the people, he appointed those who should sing TO the Lord, and who should praise the beauty of holiness, as THEY WENT OUT before the army and were saying: “Praise the Lord, For His mercy endures forever.” Be led by the Holy Spirit.

Praise with singing, loud shouts of praise TO the Lord.

The key is TO the Lord! With Words of praise and worship from His Word such as, ““Praise the Lord, For His mercy endures forever,” and “Be blessing and power and glory and honor forever to Him to sits on the throne and unto the Lamb.”

The Lord just confirmed this Word around – send out the praisers – using this verse:

Sing TO God, sing praises TO His name;
Extol Him who rides on the clouds,
By His name Yah,
And rejoice before Him.

I got interrupted while writing out this word from the Lord, and when I sat down and looked at my phone only minutes ago, I saw the above, was the verse of the day – emphasizing TO the Lord, two more times. All glory to the Lamb!

Sing songs like, “Agnus Dei,” TO the Lord at these gatherings, could be in homes. God will lead each of you.

These powers of darkness must be confronted and confused and defeated. For anyone who has eyes to see and ears to hear, those who are creating chaos and destruction (including many governors in this nation) are being inspired by satan and demonic powers and strongholds.

No natural plans of man alone will defeat these principalities and powers of darkness.

MUCH praise and prayer with fasting will. I have no idea how to organize such a plan, but I will try to share it places that have a much larger connection to people through their platforms. God gives Word in part to each of us, so together, He will show us the whole plan. We are a body. We need each other.

Part of defeating a spiritual enemy also includes that more people’s spiritual eyes and ears and minds will be loosed from satan’s grips, etc. as spirits of deception, chaos, murder, etc. are confronted and defeated.

And every stroke of the appointed staff that the Lord lays on them [their enemy, Assyria] will be to the sound of tambourines and lyres. Battling with brandished arm, He will fight with them.

So, as they praised and worshipped God and tapped, tapped, tapped their tambourines TO Him and FOR Him, with EACH tap, THE LORD struck the enemy and fought WITH them!!! 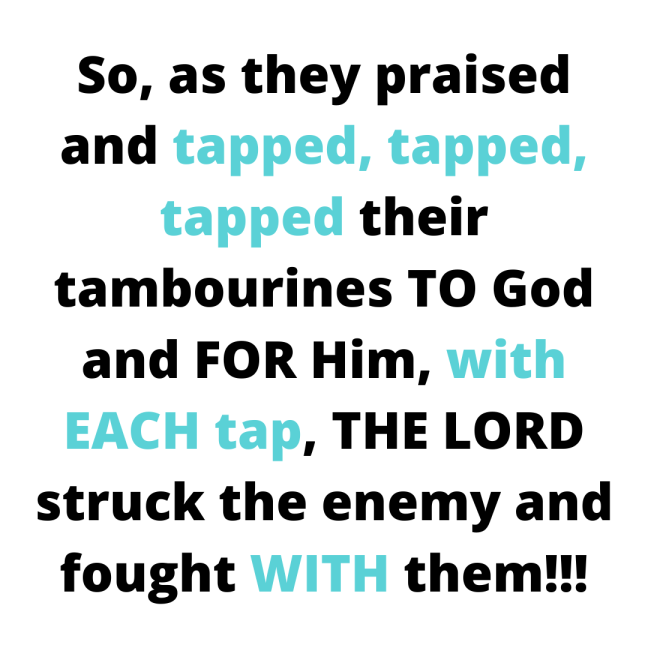 Foundation for praise as a spiritual weapon….A GREAT and powerful victory from seeking the Lord through prayer, fasting, and PRAISING and singing PRAISES TO God can be found in 2 Chronicles 20:1-30, Ammon, Moab, and Mount Seir Defeated

20 It happened after this that the people of Moab with the people of Ammon, and others with them besides the Ammonites, came to battle against Jehoshaphat. 2 Then some came and told Jehoshaphat, saying, “A great multitude is coming against you from beyond the sea, from Syria; and they are in Hazazon Tamar” (which is En Gedi).

3 And Jehoshaphat feared, and set himself to seek the Lord, and proclaimed a fast throughout ALL Judah. 4 So Judah gathered TOGETHER to ask help from the Lord; and from ALL the cities of Judah they came to seek the Lord.

5 Then Jehoshaphat stood in the assembly of Judah and Jerusalem, in the house of the Lord, before the new court, 6 and said: “O Lord God of our fathers, are You not God in heaven, and do You not rule over all the kingdoms of the nations, and in Your hand is there not power and might, so that no one is able to withstand You? 7 Are You not our God, who drove out the inhabitants of this land before Your people Israel, and gave it to the descendants of Abraham Your friend forever? 8 And they dwell in it, and have built You a sanctuary in it for Your name, saying, 9 ‘If disaster comes upon us—sword, judgment, pestilence, or famine—we will stand before this temple and in Your presence (for Your name is in this temple), and cry out to You in our affliction, and You will hear and save.’ 10 And now, here are the people of Ammon, Moab, and Mount Seir—whom You would not let Israel invade when they came out of the land of Egypt, but they turned from them and did not destroy them— 11 here they are, rewarding us by coming to throw us out of Your possession which You have given us to inherit. 12 O our God, will You not judge them? For we have no power against this great multitude that is coming against us; nor do we know what to do, but our eyes are upon You.”

13 Now ALL Judah, with their little ones, their wives, and their children, stood before the Lord.
14 THEN the Spirit of the Lord came upon Jahaziel the son of Zechariah, the son of Benaiah, the son of Jeiel, the son of Mattaniah, a Levite of the sons of Asaph, in the midst of the assembly. 15 And he said, “Listen, all you of Judah and you inhabitants of Jerusalem, and you, King Jehoshaphat! Thus says the Lord to you: ‘Do not be afraid nor dismayed because of this great multitude, for the battle is not yours, but God’s. 16 Tomorrow go down against them. They will surely come up by the Ascent of Ziz, and you will find them at the end of the brook before the Wilderness of Jeruel. 17 You will not need to fight in this battle. Position yourselves, stand still and see the salvation of the Lord, who is with you, O Judah and Jerusalem!’ Do not fear or be dismayed; tomorrow go out against them, for the Lord is with you.”
18 And Jehoshaphat (bowed his head with his face to the ground, and ALL Judah and the inhabitants of Jerusalem bowed before the Lord, worshiping the Lord. 19 Then the Levites of the children of the Kohathites and of the children of the Korahites stood up to praise the Lord God of Israel with voices loud and high.
20 So they rose early in the morning and went out into the Wilderness of Tekoa; and as they went out, Jehoshaphat stood and said, “Hear me, O Judah and you inhabitants of Jerusalem: Believe in the Lord your God, and you shall be established; believe His prophets, and you shall prosper.”

21 And when he had consulted with the people, he appointed those who should sing TO the Lord, and who should praise the beauty of holiness, as they went out before the army and were saying:

“Praise the Lord,
For His mercy endures forever.”

22 Now WHEN they BEGAN to sing and to praise, the Lord set ambushes against the people of Ammon, Moab, and Mount Seir, who had come against Judah; and they WERE defeated. 23 For the people of Ammon and Moab stood up against the inhabitants of Mount Seir to utterly kill and destroy them. And when they had made an end of the inhabitants of Seir, they helped to destroy one another.
24 So when Judah came to a place overlooking the wilderness, they looked toward the multitude; and there were their dead bodies, fallen on the earth. No one had escaped.
25 When Jehoshaphat and his people came to take away their spoil, they found among them an abundance of valuables on the dead bodies, and precious jewelry, which they stripped off for themselves, more than they could carry away; and they were three days gathering the spoil because there was so much. 26 And on the fourth day they assembled in the Valley of Berachah, for there they blessed the Lord; therefore the name of that place was called The Valley of Berachah until this day.

27 Then they returned, every man of Judah and Jerusalem, with Jehoshaphat in front of them, to go back to Jerusalem with joy, for THE LORD had made them rejoice over their enemies. 28 So they came to Jerusalem, with stringed instruments and harps and trumpets, to the house of the Lord. 29 And the fear of God was on all the kingdoms of those countries when they heard that the Lord had fought against the enemies of Israel. 30 Then the realm of Jehoshaphat was quiet, for his God gave him rest all around.

Incredible, Lord, my God! And the end result of it all was far greater. God gave them rest all around.

Lord, that Your people return to You with all their hearts and use all You have equipped us with based on the finished work of Jesus Christ also paying for authority over the works of the devil. Let a spirit of the fear of the Lord and repentance also blanket this land and every land in Jesus’ name, amen.