“For God hath not given us the spirit of fear; but of power, and of love, and of a sound mind.”

God’s Word is clear that His will is a sound mind devoid of the spirit of fear. As a mother who has watched my son tormented by the symptoms of autism spectrum disorder and its usual suspects – OCD and many other mind afflictions – I will never praise or normalize it. No, not a condition that literally has the word DISORDER in it. One that, in the past, forced my son against his will to behave in ways that brought him anguish, tears, torment, and destruction.

If the Lord Himself says, “For God is NOT the Author of DISORDER but of peace,” (1 Corinthians 14:33), then why would I exalt my words or the opinions of man against His? I wouldn’t.

But glory to God as I have stood on His truth – “My son, you do NOT have a spirit of fear but of power and love and of a sound mind,” WITHOUT wavering, I have seen my son healing before my eyes.

No more speaking out of the side of a contorted mouth repeating the same words over and over again against his will until he’s utterly exhausted and in a torment induced rage. There’s much increased reasoning and peace and so much more!

He’s been able to stay home alone for an hour at a time here and there with zero fear. This was impossible only a few, short months ago! He’s adult aged by the way.

Hallelujah to the Lamb of God! Glory to the One who bore stripes so we were healed!

Shifting gears on this website because believing the Lord with parents for their child’s healing from autism, other neuroimmune disorders like it, and disorders and demonic attacks that affect the mind is a passion for me. All from the Lord.

Sadly, much of the world normalizes sicknesses and disorders like autism – BUT the Word says – all sickness is of the devil (Acts 10:38). The Lord showed me that the demonic spirit of offense works in conjunction with other spirits of infirmity to keep people captive to sickness.

That’s why people have contacted me and commented on things I’ve posted online about healing from autism spectrum disorder with great rants of offense.

Luke 13:10-17 says, “Now He was teaching in one of the synagogues on the Sabbath. And behold, there was a woman who had a spirit of infirmity eighteen years, and was bent over and could in no way raise herself up.

But when Jesus saw her, He called her to Him and said to her, “Woman, you are loosed from your infirmity.” And He laid His hands on her, and immediately she was made straight, and glorified God.

But the ruler of the synagogue answered with indignation, because Jesus had healed on the Sabbath; and he said to the crowd, “There are six days on which men ought to work; therefore come and be healed on them, and not on the Sabbath day.”

The Lord then answered him and said, “Hypocrite! Does not each one of you on the Sabbath loose his ox or donkey from the stall, and lead it away to water it? So ought not this woman, being a daughter of Abraham, whom Satan has bound—think of it—for eighteen years, be loosed from this bond on the Sabbath?”

And when He said these things, all His adversaries were put to shame; and all the multitude rejoiced for all the glorious things that were done by Him.”

Mark 3:4-6 says, “Then He, Jesus, said to them, “Is it lawful on the Sabbath to do good or to do evil, to save life or to kill?” But they kept silent. And when He had looked around at them with anger, being grieved by the hardness of their hearts, He said to the man, “Stretch out your hand.”

And he stretched it out, and his hand was restored as whole as the other. Then the Pharisees went out and immediately plotted with the Herodians against Him, how they might destroy Him.”

We see the ones who were angry and offended when Jesus healed people from sickness or delivered them from spirits of infirmity were the Pharisees and Sadducees AKA the ones filled with demonic, religious spirits and spirits of offense with hardened hearts.

Jesus never singled out those who were afflicted in the mind to get from Him and accept their condition. He healed the multitudes from ALL manner of sickness, and He healed them ALL.

Matthew 4:23 – “And Jesus went about all Galilee, teaching in their synagogues, and preaching the gospel of the kingdom, and healing all manner of sickness and all manner of disease among the people.”

Matthew 12:15 – “But when Jesus knew it, He withdrew Himself from thence: and great multitudes followed Him, and He healed them all.”

Lord Jesus, I’m looking to Your Word, and I can’t find anywhere where You say You heal everything except disorders of the mind. Nope. So My precious Lord, I’m going by what You say. Not man. Not by the offense of man.

By Jesus’ stripes autism, PANDAS, schizophrenia, OCD, and all mental and mind disorders were healed (1 Peter 2:24) in Jesus’ name, amen.

This book below is a work of passion for me for the Lord, for my son, and for the dear mothers I’ve prayed for who’ve agonized over their children who suffer from autism and other neuroimmune disorders like it.

It’s available on Amazon and is a part of Kindle Unlimited (link): 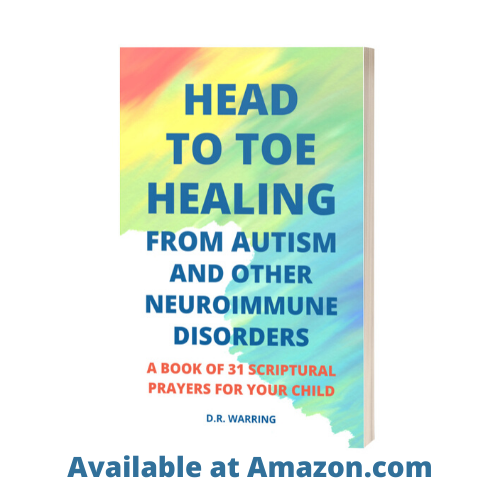 Thanks for reading and stopping by. God bless you! May His truth set you free.